How I learned to stop worrying and love Beijing

I don’t think I’ve ever gone to a country with as many mixed feelings as when I travelled to China in December 2015. On the one hand, I wanted to walk on the Great Wall, taste authentic Chinese food, and most of all, I wanted to see pandas. Conversely though, I was nervous about the pollution and I’d heard all the tales of people spitting on the street and supposedly having no manners. Furthermore, at the back of my mind, there was always the nagging dread that I wouldn’t be allowed into the country, as we’d arranged to go to Tibet, with a Tibetan tour agency. Therefore, on the day of our flight from Seoul, I was a bag of nerves. We were going to be in China for three weeks. What if all the horror stories were true? I needn’t have worried. Beijing turned out to be a fantastic city.

China doesn’t really do gentle introductions but our first couple of hours in Beijing were pretty full on. The first problem was at the airport. My passport seemed to set off some sort of check and the border guard and his supervisor spent around ten minutes looking at it and making phone calls. I had my Chinese tourist visa so all I could think of was that they’d realised I was going to Tibet and they’d decided not to let me in for that reason. After what seemed like an eternity though, I was eventually allowed in to the People’s Republic of China. We left the airport and got our first view of the dreaded haze. It was even worse than we had expected. Apparently, that week the pollution had been so bad, there had been a red alert, which is almost unprecedented even in Beijing. Next, we got completely and utterly lost, whilst trying to find our hostel. Eventually we did find a hostel, but it was the wrong one. This was when things started to turn for the better though. A guy who was working at the hostel we’d arrived at went completely out of his way to walk over a mile to the correct hostel with us. He even carried one of Janey’s many bags. When we got there, I offered to buy him a beer to say thank you. He wouldn’t hear of it. He had just wanted to help. It was an incredibly kind gesture and it made us think that the negative reputation that the Chinese have in many other Asian countries isn’t entirely accurate.

After buying dust masks, the next day we set out to explore the city. Our first port of call was the wonderfully named Temple of Heaven. This is located at the centre of a large municipal park. Walking through the park, we saw groups of old ladies doing Tai Chi and a bunch of middle aged people playing a game of keepy-uppies with what looked like a large shuttlecock. Some of them were extremely skilful and none of them seemed remotely bothered by the smog, it was just a fact of life in Beijing. The Temple itself was spectacular and certainly worth a visit. 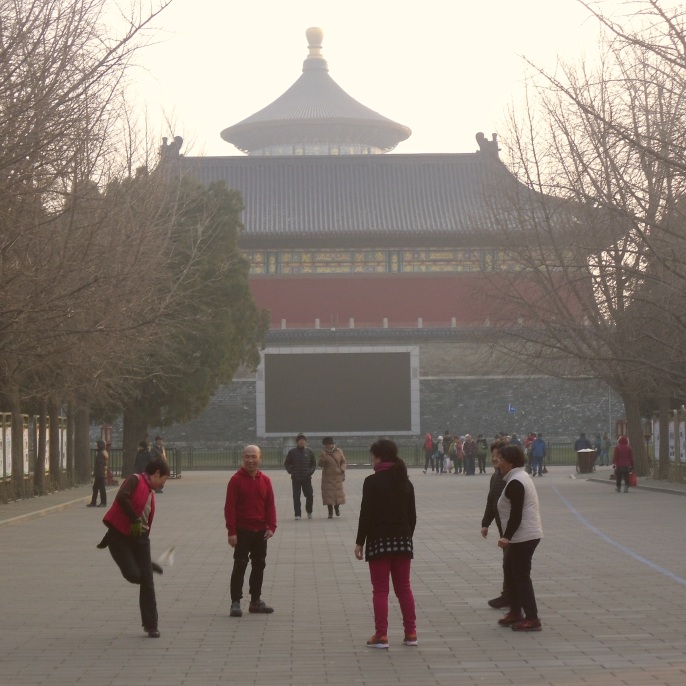 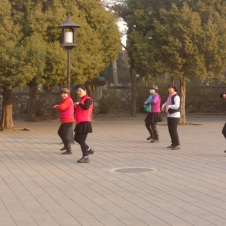 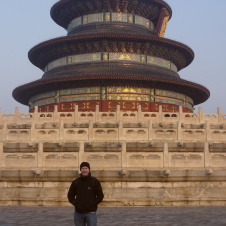 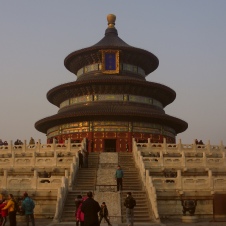 Later, we visited another spectacular site. The Birds Nest Stadium and the Aquatics Cube were the venues for the athletics and swimming events at the 2008 Summer Olympics. We’d timed our visit to be there when it was dark, as at night both buildings are illuminated. The effect is mesmerising. Finally, we finished off our first full day by exploring some hutongs. These are a type of narrow street or alleyway, where you can find some excellent shops, cafes and restaurants. They were extremely cool and you could spend hours wandering around and getting happily lost in them. 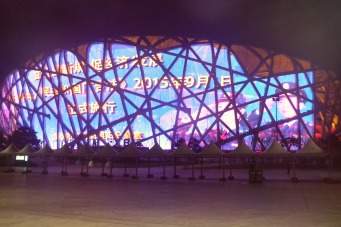 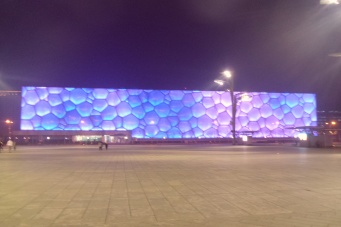 Day three was the highlight of our time in Beijing. We booked a trip from the hostel to go to the Mutianyu section of the Great Wall of China. Everyone has seen the Great Wall on television, and in books but nothing prepares you for actually being there. There are not enough superlatives in English, Chinese or any other language to describe just how awe-inspiring a sight it is. I’ve been to Macchu Picchu, the Taj Mahal and Angkor Wat and the Great Wall was the equal of all of them. We took a cable car to get us up to the wall and then went for a walk. Mutianyu is easily accessible from Beijing but is isn’t the most touristy section of the wall. That “honour” goes to Badaling. Because of this, and the fact that we were there in mid-December, there were surprisingly few other tourists on the wall. Overnight, there had been a light dusting of snow, which made the wall look even more stunning. The only downside was that the smog was still visible, more than 60 kilometres outside the city limits. We walked for around an hour tolerating some steep sections, slippery underfoot conditions and one extremely persistent salesman, until we reached the end of the walkable part of the Mutianyu section. Beyond this, the wall is in a ruined state and it wouldn’t have been safe to have gone any further. Interestingly, at this point a lot of people had tied little red bits of plastic in a tree, presumably as some sort of offering designed to bring good luck. It wasn’t the most environmentally sound offering but it still looked pretty cool. To put the seal on a truly memorable day, when we descended from the wall, we ate one of the best meals we would have in all our time in China. 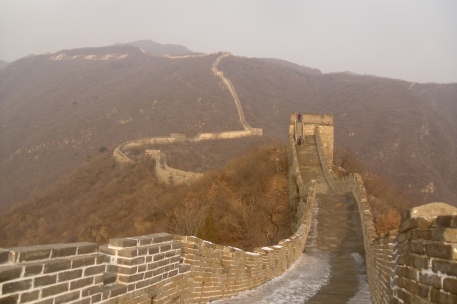 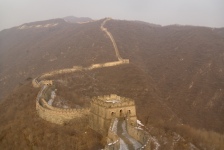 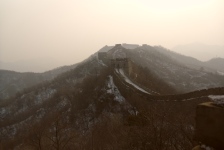 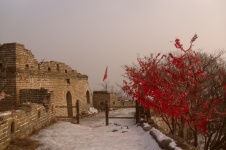 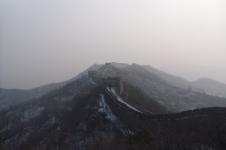 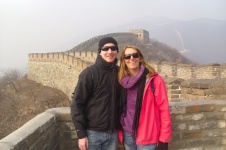 We’d been to the symbol of China. On Day four, we had to go the centre of the Chinese Universe; Tiananmen Square. For many Westerners, Tiananmen conjures up uncomfortable images of the massacre of innocent civilians in 1989. Not going there though would be like visiting Paris and not going to the Eiffel Tower though. We had to see it. From the moment we emerged from the subway, the high security presence was evident. We had to go through metal detectors to gain access to the square and then once on the square, there were large numbers of troops, ready to accost any potential troublemakers or dissenters. From one end of the square the smiling face of Chairman Mao looks down onto the people below from Tiananmen gate. I’m glad that we went there to see it, but it wasn’t always a comfortable experience. It was a reminder that after more than fifty years of Communism, China is still an extremely repressive place and there is little sign of that changing in the near future. 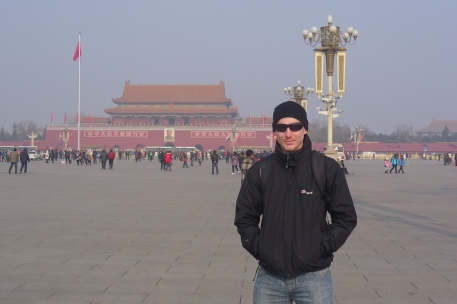 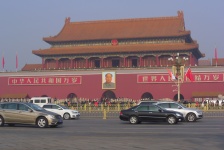 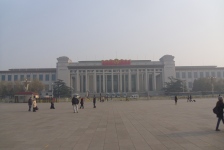 From Tiananmen, we went to the Forbidden City. For most tourists, this is one of the highlights of their visit to Beijing but I was disappointed. Perhaps, I was still feeling subdued after the police state feeling of Tiananmen but it didn’t really enthral me at all. Yes, the buildings are spectacular, but it was extremely overcrowded and we were often jostled out of the way by domestic tourists, who didn’t want to wait a few seconds longer to get the photo that they wanted. My mood was lifted back up by walking through some really trendy hutongs to get to the Drum Tower. There, we witnessed a powerful and visceral drumming performance. It was certainly one of the more impressive live music performances that I’ve seen on my travels, although an Indonesian Guns N Roses covers band may run it quite close. 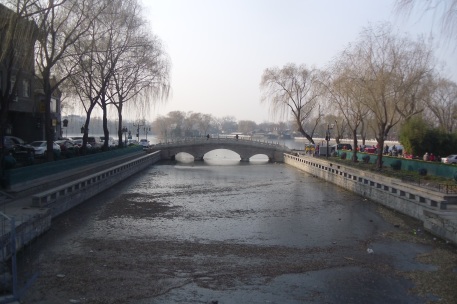 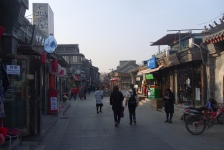 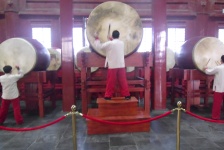 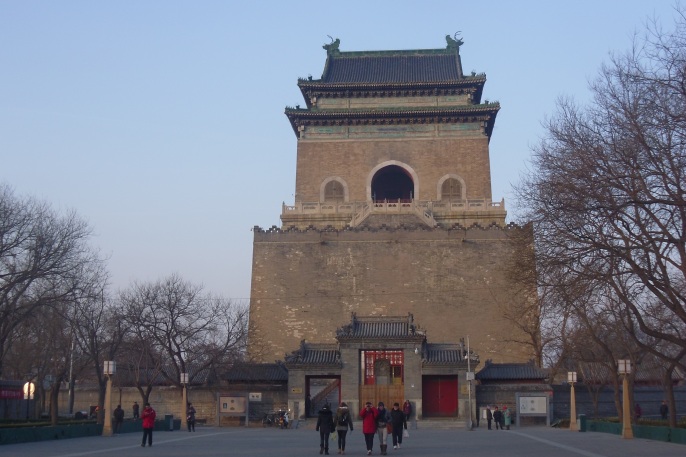 After the Drum Show, we had to go back to the hostel and pack our bags for our internal flight to Chengdu. Just like that, our four days in Beijing were over. I was worried when we went there but I had certainly learned to love it. In fact, the highest compliment that I can pay it is that I preferred it to Tokyo or Seoul (not Hong Kong though, no big city in that region beats Hong Kong) and I’m amazed to say it; I’d love to go back again sometime.

We stayed at Beijing Saga International Youth Hostel. I would recommend it very highly. The staff all worked incredibly long hours but were extremely friendly and had great customer service skills. They also spoke impeccable English. Furthermore, there’s a bar which is great for meeting other travellers and it has an English menu, with a mixture of Chinese and Western dishes.  http://www.sagayouthhostelbeijing.cn/