There are few places on earth that excite the imagination quite like the Amazon basin. The largest rainforest in the world covers more than two and a half million square miles and is spread across nine different countries. It also boasts an outstanding array of flora and fauna, a lot of which, including the mighty anaconda, is unique to the region. The vast jungle is also home to indigenous tribes who remain remarkably detached from the modern world. Put all of these elements together and it’s obvious why the Amazon is so beguiling for travellers and adventurers. Tours to the rainforest can easily be organised from Quito, the capital of Ecuador. The Cuyabeno National Park is located close to the Colombian border, and tourists can take four, five or six day trips into the Amazon there. Back in 2007, I took the five day tour into the jungle. Eight years on, it still remains one of my all-time favourite travel experiences. 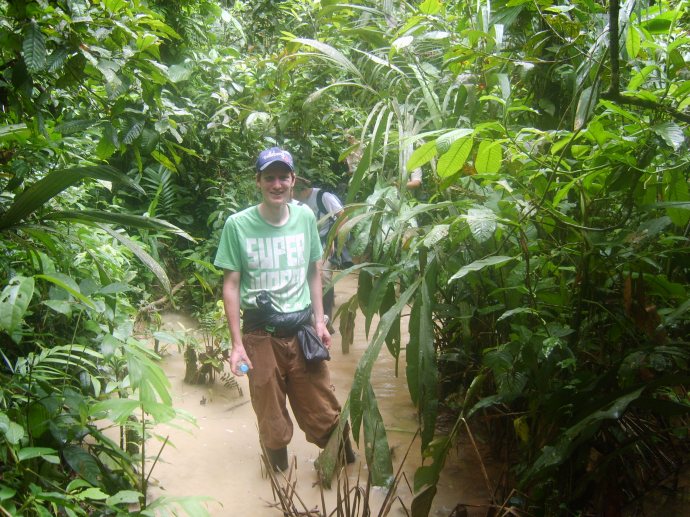 The overnight bus from Quito arrived in Lago Agrio at 7:30am. This gave us two and a half hours until our transport arrived, which was about two hours and fifteen minutes too long to spend in Lago Agrio. This is not a city you’d want to hang around in. When we departed, we endured a bone shaking three hour journey to El Puente, the starting point for the tour. These were some of the worst roads I experienced in all of South America. Finally though, we arrived and were herded straight onto a canoe. A two hour journey down the river took us to the Samona jungle lodge. This journey was rather more pleasurable. Chirpy and colourful macaws sang in the trees and we also spotted three different species of monkeys. That evening, after settling into the lodge, we were taken out to the Laguna Cuyabeno where we swam and watched the sunset. At first I was sceptical. Aren’t there piranhas in the Amazon?! Don’t they like eating people?! Not according to our guide Jairo. He told us that piranhas are like sharks and will only bite you if you’re already bleeding. Good enough for me! In we jumped and swam in a lagoon in the middle of the Ecuadorian Amazon. Truly amazing. 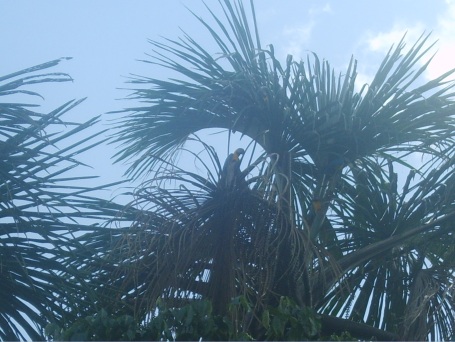 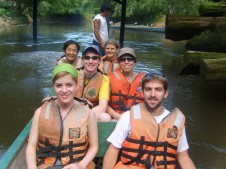 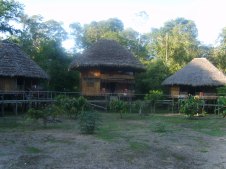 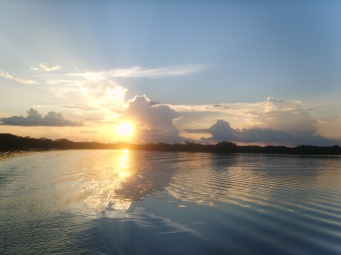 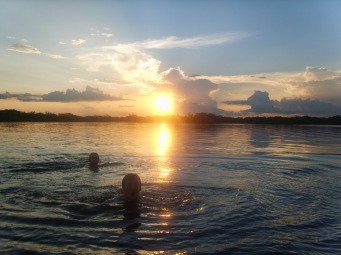 The second day commenced in a rather challenging manner. After breakfast, we were taken out on the motor boat and deposited a considerable distance down the river. We were then placed in traditional dugout canoes and told that we were going to paddle back to the lodge. This was difficult, especially because of the fierce sun, but also massively rewarding. Along the way, we caught fleeting glimpses of pink freshwater dolphins and the rarely seen South American Coati. The giant anaconda remained elusive though. In the evening we watched a mesmerising lightning display over the lagoon before embarking on a night hike through the forest, which was teeming with tarantulas and scorpions. Quite how our immensely knowledgeable guide, Jairo, could navigate his way through the dense dark forest so easily continues to be a source of wonder. 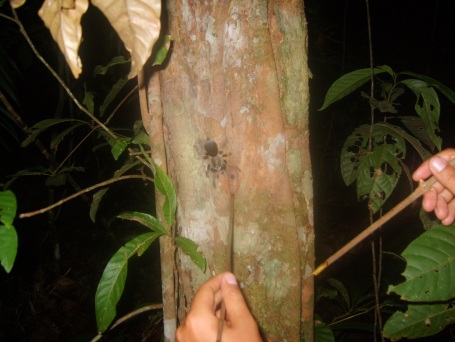 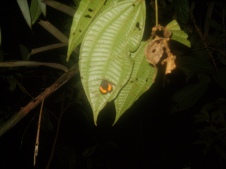 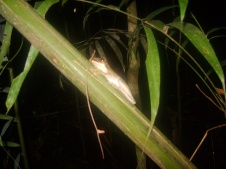 Day three was the highlight of the expedition. In the morning we travelled upriver and met a local tribe, called the Sione. There we were shown how they farmed and made a living for themselves in an incredibly unforgiving environment. From the Sione, we moved onto the Cofan tribe, where we were hugely privileged to meet a Shamen. Wearing his traditional dress he talked to us about the training that he had done to become a Shamen, and the hallucinogenic drinks that the Shamen use to induce a higher state of consciousness. This was followed by a demonstration of how he heals people on the cook from our lodge. It’s debatable whether or not he cured the cook’s bad back, but it was certainly intriguing to watch. In the evening we returned to the lagoon where we went piranha fishing! They may not have attacked me whilst I was swimming, but they certainly went for the bait. I was lucky enough to catch a massive one, but certainly not brave enough to hold it! Its razor sharp teeth looked like they could cut through human bone very easily. This was no problem for Jairo who held it with ease.  He was a proper man of the jungle! 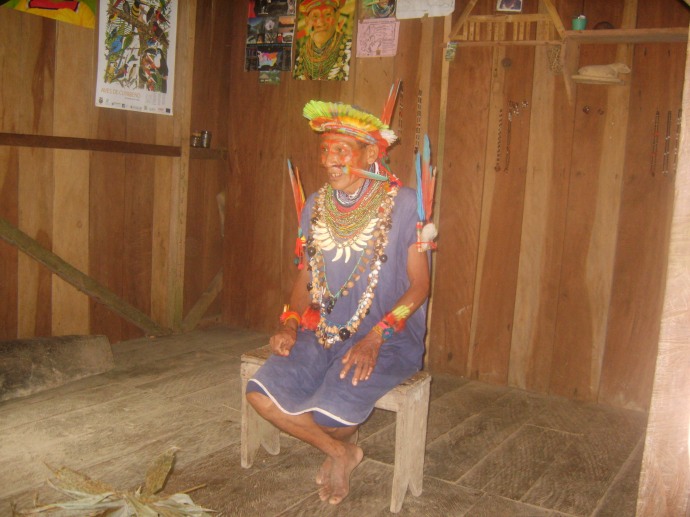 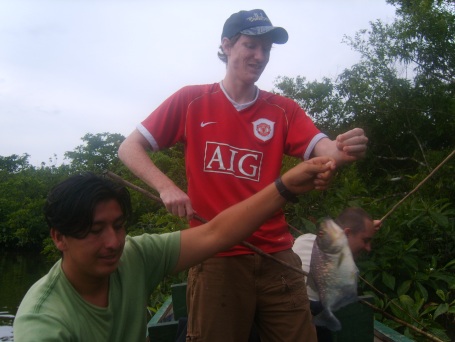 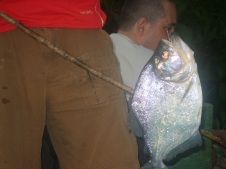 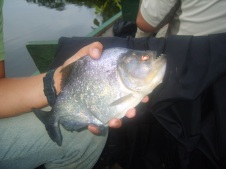 Our final full day began with an exhilarating three hour trek into the jungle. It was hard work but immense fun. The route took us through creeks and swamps and on a number of occasions Jairo had to hack at the foliage with his machete to find us a path. I got to fulfil an ambition by swinging from a vine, and then later in the trek we also ate ants from the bark of a tree. Not for the faint hearted! The trek did also have educational value as well, as Jairo explained to us which plants had medicinal qualities and what they could be used for. For example, many of the indigenous people believe that the milk that can be obtained from the bark of the Quinina tree can cure malaria. That evening we paddled the dugout canoes in another sadly futile attempt to find an anaconda. Our efforts to see the great snake were not rewarded. However, we did see a Toucan, the symbol of the Amazon region. Most impressively of all we were treated to the magnificent sight of a solitary vulture circling low looking for carrion. Another unforgettable moment. 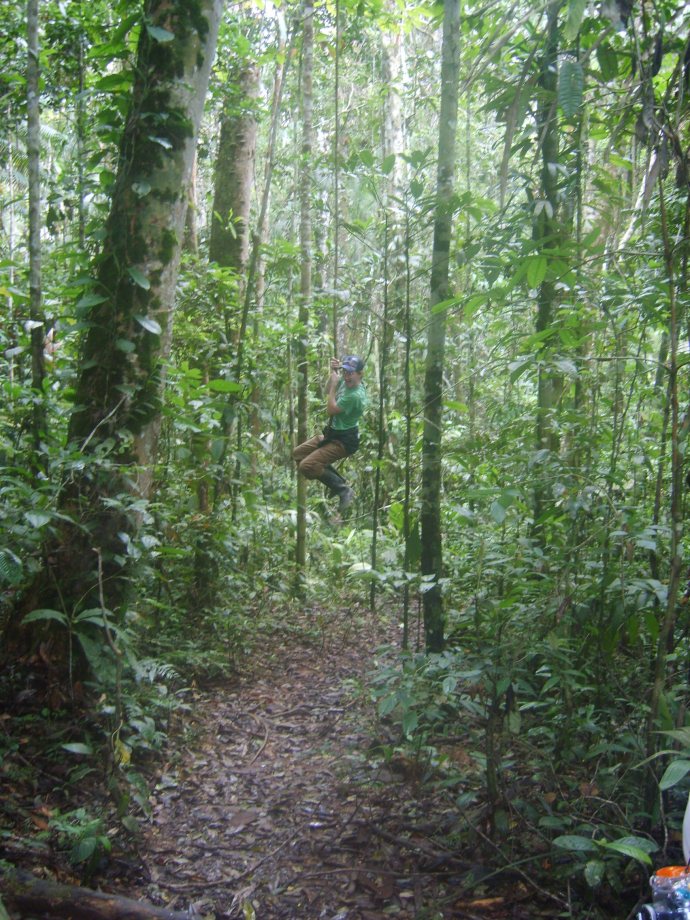 All great adventures have to come to an end, and so unfortunately did my mini adventure. I wasn’t even looking forward to getting back to Quito, let alone having to kill a few hours in Lago Agrio. In what seemed like a consolation prize, we were taken out on a final hike through the forest, before the boat journey back to El Puente. Sitting on the boat I mused on the memories of a wonderful five days. In that time I had met indigenous tribespeople, felt like an adventurer and seen an array of wildlife that, in Ecuador, could only be bettered in the Galapagos. The Amazon didn’t just meet my expectations, it exceeded them.

This article was originally written eight years ago for a sadly now defunct newspaper called The Ecuador Reporter. Whilst I have made every effort to ensure that the information is still correct, I haven’t been able to find current prices. I’m happy to recommend Gulliver’s travels (http://www.gulliver.com.ec/) and Trans Esmeraldas, the bus company that I travelled from Quito to Lago Agrio with. (http://www.transportesesmeraldas.com/portal/) However, if you want specific prices you’ll have to find them for yourselves!

Mountain biking down an active volcano in Ecuador

At 5897 metres above sea level Cotopaxi, in Ecuador, is one of the highest active volcanoes in the world. Visible from Quito on a clear day, the majestic monolith dominates the skyline from miles around. Its perfect cone and snow-capped peak make it the most stunningly beautiful of all Ecuador’s volcanoes. A popular challenge is to attempt to hike to the summit of Cotopaxi. Beginning from the Refugio at the height of 4800 metres, the brave climbers trudge through deep snow drifts and fight against debilitating altitude in their battle to reach the top. Whilst it is obviously massively rewarding for those who do succeed, the combination of the altitude and the notoriously unpredictable weather patterns that surround Cotopaxi mean that success is far from guaranteed. Unfortunately, many climbers return to Quito disappointed, having had their attempts thwarted. An interesting alternative for those who fancy a bit of adventure, but don’t want to go to the top of the mountain, is to mountain bike down it instead. Having already biked down Bolivia’s notorious “Death Road” a couple of months previously, this was definitely a challenge that I wanted to undertake! 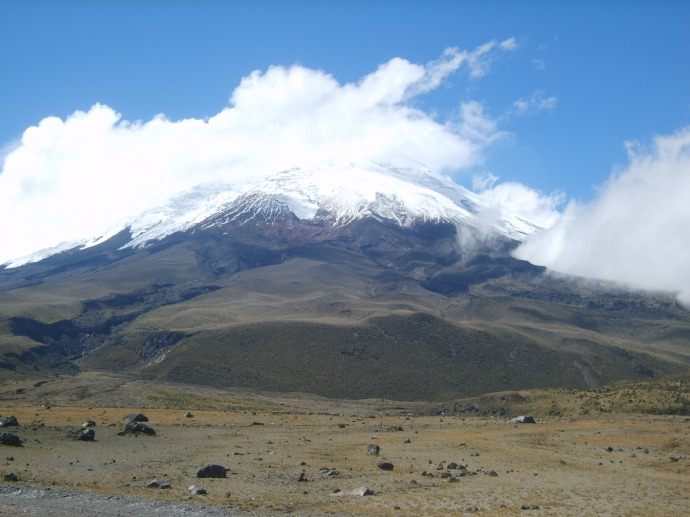 The Biking Dutchman was established in 1991 and has been running day trips down Cotopaxi ever since. It is easy to see why the company’s success has endured; the ride is utterly exhilarating. The minibuses leave Quito at 7am and make their way to the national park, eventually stopping 4500 metres up the mountain. From here the views of the mountain are breathtaking and provide wonderful photo opportunities. After a safety briefing, we tentatively began our descent. The first 8 kilometres of the ride were all downhill, on a frightening gradient, and we achieved some truly phenomenal speeds. Whilst the ride is suitable for most ability levels, I wouldn’t really recommend it to complete beginners as the bikes were basic and only had front wheel suspension. This meant that maintaining balance was a tricky proposition. I think my knuckles were white from gripping the handlebars so hard! Thankfully, I made it through this stretch with only a couple of minor falls. 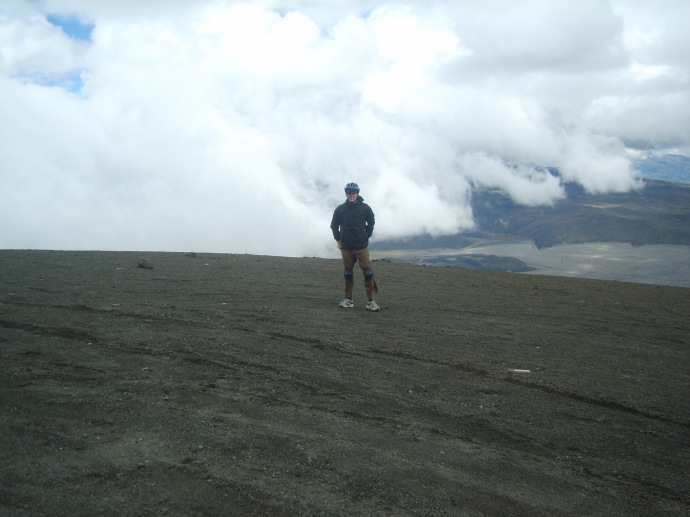 When the descent has been completed the ride slows down and takes on a more sedate nature. After the rush of going downhill and holding on for dear life, it was pleasant to actually do some pedalling and take time to appreciate the bewitching lunar landscape. The massive boulders that have been spewed from the volcano in its moments of fury make for particularly compelling viewing. 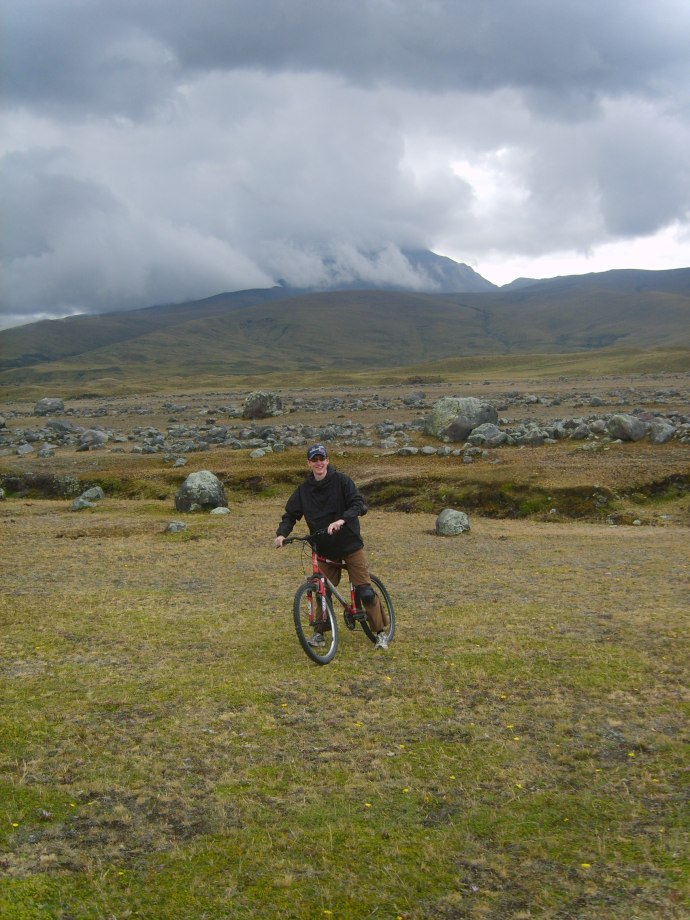 Once we had eaten a delicious, and much needed, home-made lunch, we embarked on the final section of the ride. This took us across barren grasslands before plunging through lush pine forests. Pedalling across the grasslands and having to continually change gears was torturous. However, once we headed into the forest, all the effort seemed worthwhile. Here it was possible to really put my foot down, and get some serious speed up, flying over rocks and through puddles in the process. The speeds were comparable to further up the mountain but without the same fear factor, making this my favourite section of the ride. Finally, after four hours of hard riding, we reached the end point. Many of us felt seriously battered and bruised. None of us said that we didn’t enjoy every single minute of it.

The trip is competitively priced at $55 per person. This includes lunch and transport to and from the national park. It doesn’t include the $10 entrance fee to the national park. Check out the Biking Dutchman’s website at http://www.bikingdutchman.com/

Disclaimer: This is an old article which I wrote eight years ago for a sadly now defunct paper called “The Ecuador Reporter.” I’ve updated the article so all price information is current, but please don’t blame me if anything else is out of date!