It’s taken me a long time to get round to writing this blog. It’s over two months since I visited Angkor. Part of that is down to the fact that I’ve been doing A LOT of travelling. More importantly though, when somewhere is as stunning and world-renowned as Angkor Wat, how can one person encapsulate in words what makes it so special? It is such an awe-inspiring place though that I feel obliged to try. Firstly, let’s dispel a common misnomer. Angkor Wat is the name for only one of the temples. There are actually more than fifty ancient ruins scattered outside the town of Siem Reap. The area is so large, and the temples so multitudinous that to see them properly really requires three days. Fortunately though, a three day pass is excellent value at just $40 US. Our hostel was able to organise a tuk-tuk driver to drive us to and from the temples.  This was a good decision as it was really cheap and many of the sites are quite far apart, which makes going there independently challenging, except by bicycle, which we weren’t feeling energetic enough for unfortunately.

On our first day we visited the Roluos group of temples. These are the furthest away from Siem Reap and are notable for predating most of the more well-known temples. They are also much less crowded, making it a gentle introduction to the ruins. Later that day we took a boat trip, to see a floating village, on the Tonle Sap lake. This took 2 hours and was interesting for about 2 minutes. It was also extremely overpriced at $20. If you find yourself in the area don’t waste your time or money! 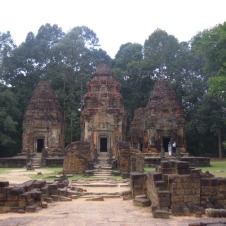 Our second day was the classic sunrise to sunset day that most visitors to Angkor will enjoy during their visit. We left our hostel at 5am. The purpose of this was to be able to get to Angkor Wat for sunrise. As the main facade of the temple faces west, the sun rises from behind, making for some truly spectacular photo opportunities.  Every other tourist in Siem Reap has the same idea though so if you want a good view be prepared to get there very early. Once the sun had risen, we ventured inside the temple which is truly humungous. It’s a strange thing to admit but my first thought was that it reminded me of the old temple where King Louis lives in the Jungle Book. An encounter with some particularly aggressive simians did little to dispel that opinion! In all seriousness though, Angkor Wat is as stunning on the inside as it is on the outside.  It is well worth its exalted reputation. 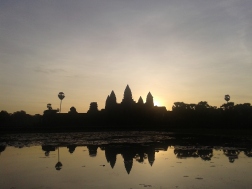 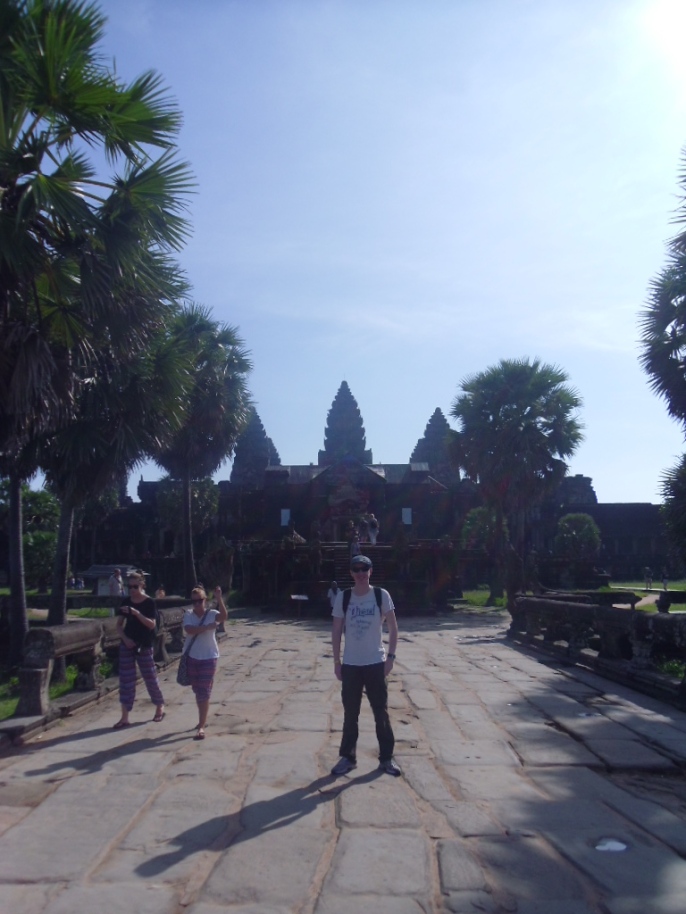 Our next stops after Angkor Wat, were the temples of Banteay Kdei and Ta Prohm. When Angkor was rediscovered by French explorers in the 19th century they made the decision to leave Ta Prohm in exactly the condition that they found it, rather than try to clear the vegetation and the huge trees that have stretched their twisted, gnarled roots over the temple walls. This makes it extremely atmospheric. Ta Prohm also owes its fame to being used for the Tomb Raider film. However, not being a fan of rubbish movies that are based on computer games (have you seen Streetfighter?!) this didn’t really make much difference to me.

The final temple we visited before lunch was Ta Keo. This is a massive 50m high pyramid shaped structure, which towers over the rest of the temples. It is also surprisingly reminiscent of Mayan and Aztec ruins. After a tough scramble up the vertiginous steps we were rewarded with some breathtaking views when we reached the top. I was also imagining, probably erroneously the brutal sacrifices which may or may not have taken place up there. Which is perfectly normal of course.

After a delicious lunch of Amok (similar to a Thai green curry but less spicy) and rice we continued our visit to Angkor Thom. This was actually a vast city in its own right, and is in my opinion, even more spectacular than it’s more well-known sibling. It is home to some evocatively named places such as the terrace of the leper King and the elephant parade. The centrepiece though is a temple called the Bayon, the veneer of which is adorned with 37 giant head statues, which even now manage to retain an air of intimidation.  Going to Angkor Thom in the afternoon was also a very good idea as there were much fewer people, and some areas were also almost deserted. This made it the highlight of the day for me. 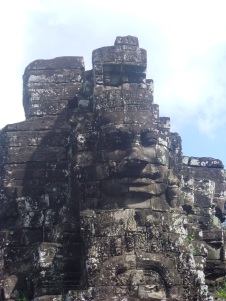 Our epic day culminated with a hike through the jungle to Phnom Bakheng temple to watch the sunset from an elevated position. Upon reflection, it wasn’t worth expending the energy. Overly officious security guards, and the predictable scrum for photos, made it an anti-climactic end to an otherwise fantastic day. The  best thing about Phnom Bakheng was that as soon as the sun descended below the clouds, a gust of wind whistled through the temple, there was a loud crack of thunder and a spectacular rainstorm ensued, which made the tuk-tuk ride back to town a rather memorable experience, although somewhat traumatic for our poor driver Kaka! 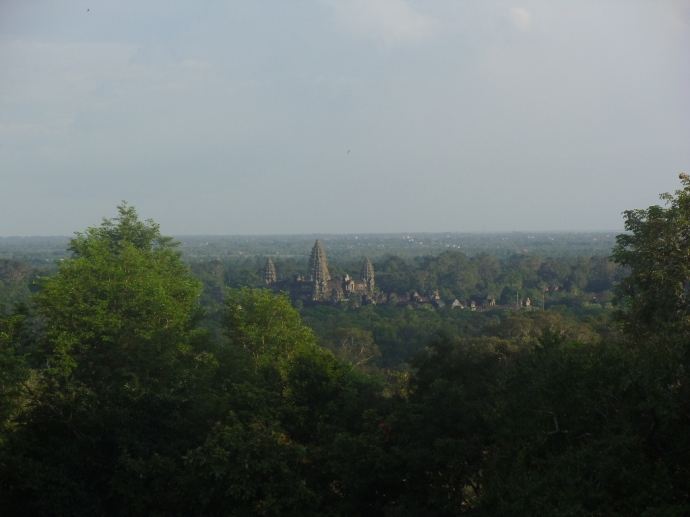 The sunrise to sunset day is pretty gruelling. Walking around for twelve hours in very hot heat means it’s not for everyone. Those that want to visit but don’t feel like they have the requisite energy could either miss out sunset or just space it out more over the three days.  Whilst drinking an extremely well earned beer in Siem Reap that night, I reflected on the exhausting but exhilarating day. I’ve been lucky enough to travel a lot and visit some awe-inspiring places. Angkor was up there with the very best of them, such as Machu Picchu and the Taj Mahal. I would encourage anybody to go there and experience it for themselves.

We stayed in the excellent Tropical Breeze guest house. This is just a short walk to the town centre, and had extremely helpful staff.

If there’s one thing that I have learned on my travels, perhaps above all others, it’s to make my own opinions about places. Even if the vast majority of opinion about a place is overwhelmingly negative I like to make my own mind up. Thus, I have found that I didn’t get hassled every moment I walked down the street in Morocco, the nightlife in Buenos Aires was better than that in  Rio De Janeiro, and Belfast is one of the friendliest cities I have visited in the UK. It was with this maxim in mind that I approached our recent trip to Cambodia. So much of what I had heard from fellow travellers of Phnom Penh, the capital city, was derogatory.  All wise opinion seemed to suggest spending as little time as possible there before heading north to Siem Reap and the wonders of Angkor. One friend even stated that she “wouldn’t even spend an hour there.” I’m not going to state that these other travellers were wrong in their opinions, only that my experiences of this bustling and vibrant city, left me with an entirely different impression. 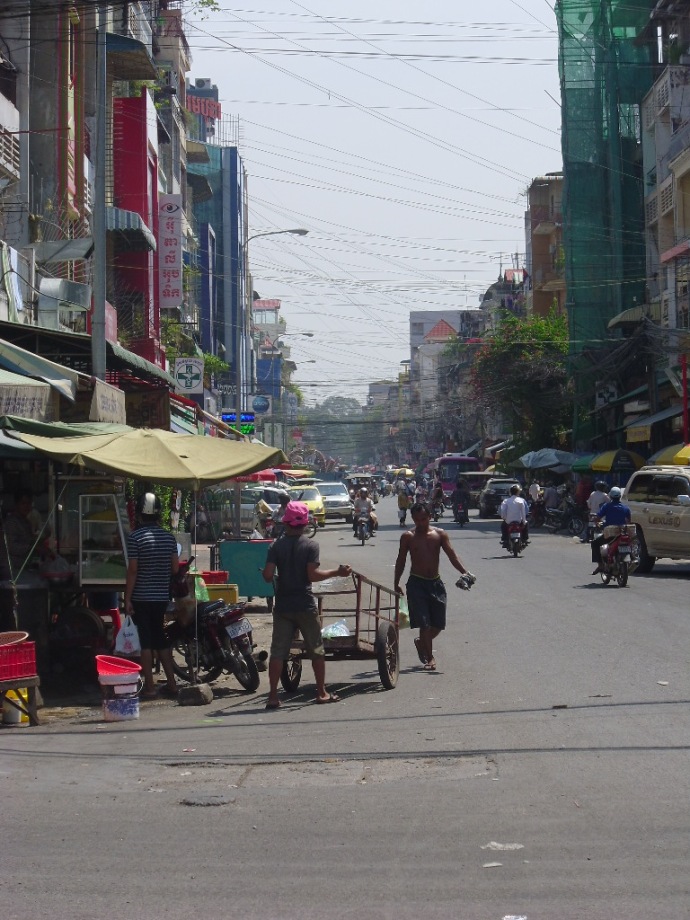 At first glance, it’s easy to see why so many people dislike Phnom Penh. It’s noisy, chaotic, polluted, and you do see some extreme poverty. However, this is the case in many other Asian capital cities, including some with much less maligned reputations, such as Bangkok. It is my preference to judge a city on it’s atmosphere, and Phnom Penh has this in abundance. Upon leaving the airport, our senses were immediately assaulted with a cacophony of noise and riot of colour. Staring open-mouthed from the taxi we wondered just how many people could fit on one motorbike. The most we ever saw was six, although three seems to be about standard.

Another thing that struck me instantly, is how much of daily life takes place by the side of a road.  Pavements do exist in Phnom Penh but they are most definitely not for walking on. Open shopfronts spill out onto the street, jostling for space with workshops, cafes, and anybody else that is trying to scratch some sort of living. Pedestrians just have to walk in the road and try to dodge the multitude of tuk-tuks and dangerously overladen cargo vehicles. Just walking down the road can be a truly hair-raising experience. As for  trying to cross, you are pretty much taking your life in your hands every time you attempt it! 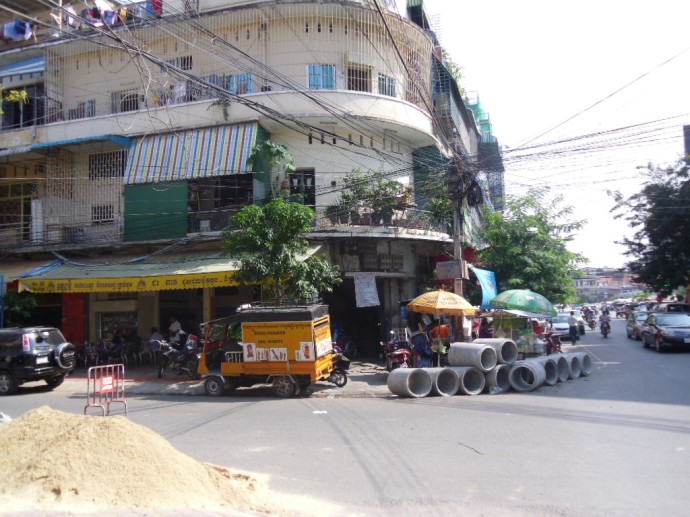 After settling into our hostel we ventured out into the chaos. Our first port of call was the riverfront area. where a long promenade overlooks the broad Tonle Sap river. As we arrived on a Saturday night, the whole area was alive with street artists, and strangely a bunch of middle aged ladies performing some sort of aerobics display, watched on by engrossed youngsters from their mopeds. Sadly my camera decided to be temperamental at this point, so unfortunately I have no pictorial evidence of this truly bizarre spectacle. The area is also home to pretty much all the best restaurants in the city.

The next morning after some much needed rest, we headed to Wat Phnom, the spiritual centre of the city, and the place that it takes it’s name from. Situated on a small hill, a beautiful Buddhist temple nestles between the trees. Climbing up, it feels like an oasis of tranquility away from the madness of below. Despite it’s significance it was also remarkably free of tourists.

Similar to Wat Phnom, but certainly mot free of tourists, is the Royal Palace complex. This is a complex of ornate pagodas which still serves as the official residence of the King of Cambodia. Therefore, not all of it is open to tourists but the parts that are are truly spectacular.

The highlight for many visitors is a trip to the silver pagoda which contains a statue of an emerald Buddha. However, my habit of making my own opinions of a place, also applies to not getting overly excited by places that are overhyped. In my opinion this was certainly one of them. There are far more beautiful buildings elsewhere in the palace complex.

Alongside it’s architectural gems, Phnom Penh is also a shoppers paradise. With this in mind Janey excitedly explored the various different markets in the city in search of bargains. She was definitely not disappointed. Clothes, fresh fruit, fake jewellery and a plethora of other products can all be found. Be prepared to haggle and haggle well though!

Finally, at the end of our one full day in Cambodia’s capital (we were indeed in a hurry to get to Angkor), we visited a fantastic organisation that is helping to empower disabled people in the city. Seeing hands massage is staffed entirely by blind people, all of whom probably wouldn’t be able to work if it weren’t for the initiative of the charity. For just $7, you can get an hour long massage from wonderfully skilled masseuses. At the end not only do you feel incredibly relaxed, but you have just helped a person in need as well. What’s not to like?

The next day, whilst sitting on the Mekong Express to Siem Reap, I reflected back on Phnom Penh. Yes it was a lot of the things that it’s detractors stated it to be. But it was also magnificent. I loved it.

Seeing Hands massage is located at #34Eo, St 108, in front of Phsar Chass Park. Pay them a visit if you’re in Phnom Penh. It’s well worth it.