Ask most non-skiers where they think the best ski resorts in the world are, the chances are they’ll say Switzerland or France. Some might suggest the Canadian Rockies. Hardly any will mention Japan. However, surprisingly to many, the land of the rising sun is one of the world’s very best skiing and snowboarding destinations. Japan receives an incredible 5.5 metres (18 feet) of snow a year, nearly all of which is fresh powder. If you’re into winter sports, that’s the stuff that dreams are made of. There are also over five hundred different ski resorts to choose from. One stands head and shoulders above the others though; Japan’s answer to Whistler, the truly majestic Niseko. 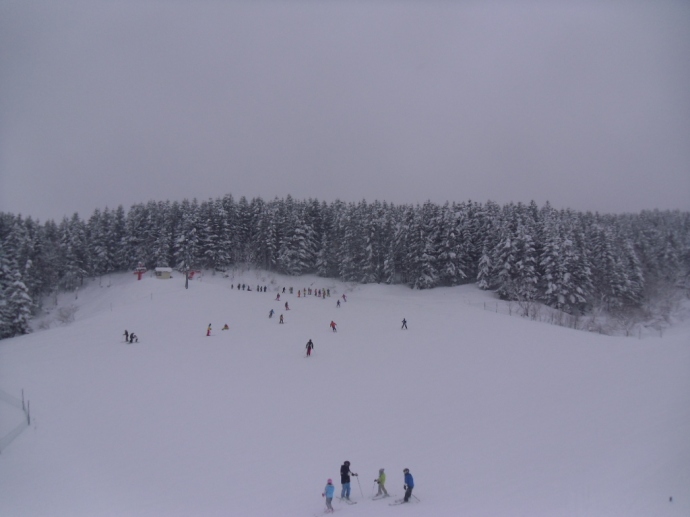 Janey and I were lucky enough to spend four days in Niseko over Christmas, the centrepiece of our three week holiday to Japan. From the moment we arrived there, we fell in love with the place. That was despite having to endure a blizzard on the way from the bus station to our lodge. We later found out that we could have organised a pick up! The lodge itself was a large part of what made our stay in Niseko so memorable. Sat by a roaring log fire, with a cup of hot mulled wine, whilst the snowstorms raged outside, it felt like heaven on earth to me. 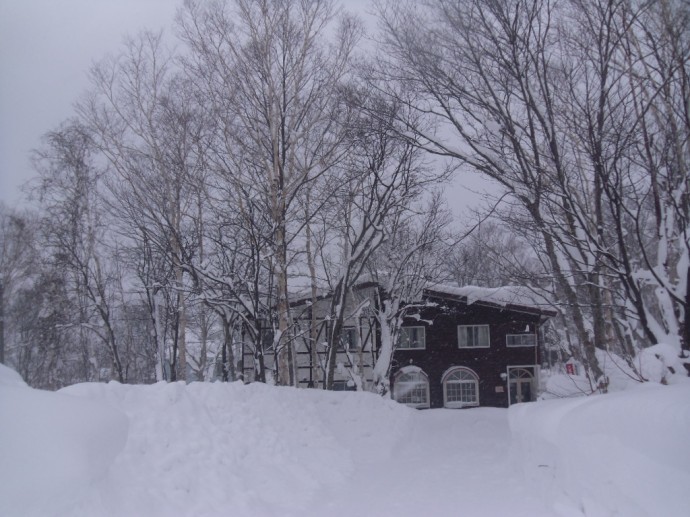 Our first day of skiing, on Christmas Eve, was a frustrating one. It had been twenty months since our previous trip to the Sierra Nevada in Spain. Where had all the progress gone? I couldn’t seem to even change direction without falling over! The only consolation was that falling into the powder snow, felt like falling into the softest pillow you could ever imagine. December 24th was spent in Gran Hirafu, the largest of the four connected resorts that make up Niseko United. On Christmas Day, we went to Annupuri, which was much quieter and far closer to our lodge. I started tentatively at first, but bit my bit my confidence started to grow. I was doing entire runs without falling over! Then, on about my fourth run, I just let it go. I was skiing with complete confidence and freedom. The feeling of liberation was incredible. On the final run before lunch, we then got an amazing surprise Christmas present. For the first time in three days, the clouds cleared, and were treated to some absolutely mesmerising views of Mount Niseko. 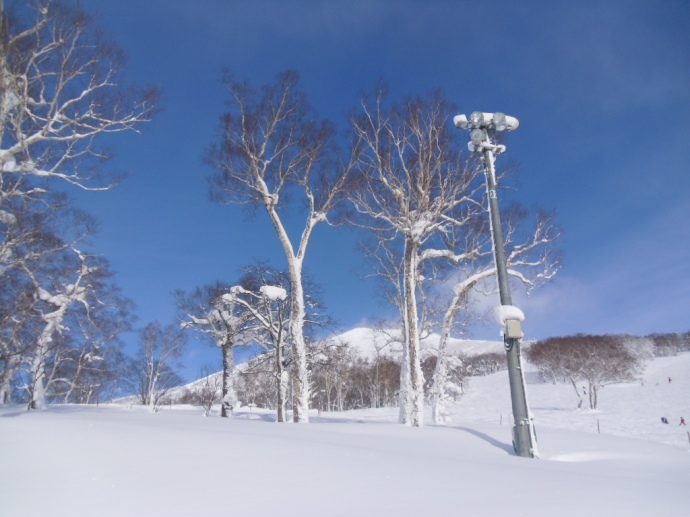 When I woke up on Boxing Day, every muscle in my body ached. My lower back was stiff and walking downstairs was a bit of an ordeal. Even though it was our last day, I couldn’t find any motivation. That was until Alan, the lodge manager, told me “there’s not many times in your life when you’ll ski on sixty centimetres of fresh snow.” SIXTY CENTIMETRES?!?! Was that really how much had fallen overnight?! Apparently it was and remarkably all my aches and pains disappeared rather rapidly. Within half an hour we were back out on the slopes for one of the best days of my life so far. In the morning, we sessioned the green runs four times, to refine our techniques, in preparation for taking on a red run. This had been my aim at the start of the three days. Now it was time to make it happen. When we stepped out of the gondola, at the top of the red run, the conditions were atrocious. Visibility was about two metres, the temperature was about minus ten, and the winds meant business. Getting to the bottom in one piece was going to be a bit of a test! Amazingly, we proved to be up to the challenge. It took about half an hour as we had to frequently stop to check that we were going in the correct direction. However, in the end we made it to the bottom without falling once. This was utterly exhilarating and a proud achievement. So we did it again for good measure, this time in slightly more clement conditions. 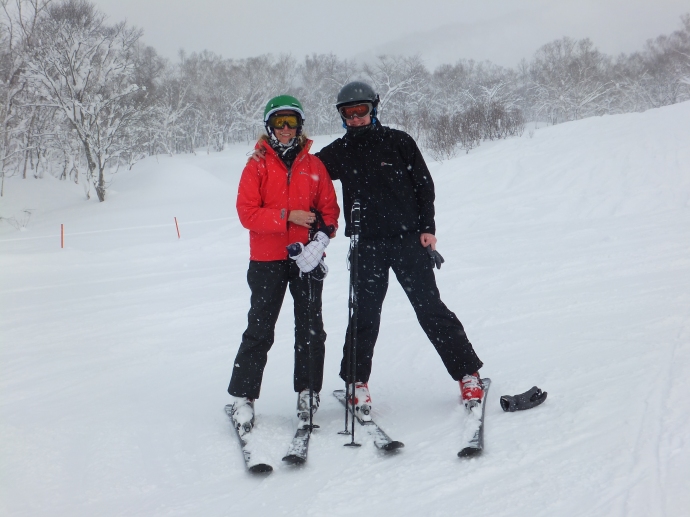 The only thing that could top that morning was what was to come later in the day; night skiing. If there is one problem with Niseko, it’s that the majority of time the visibility isn’t good. The Siberian winds and eighteen feet of snow might have something to do with that. However, once the afternoon light fades, the floodlights are switched on, and the effect is just magical. Visibility is perfect, and to make it even better, the slopes are practically empty. Skiing through thick powder, on an almost empty piste in what felt like the middle of the night, is one of the best things I’ve ever done. We rounded off the day with a trip to the natural onsen (a volcanic hot spring) and some hot sake. Life really doesn’t get much better. 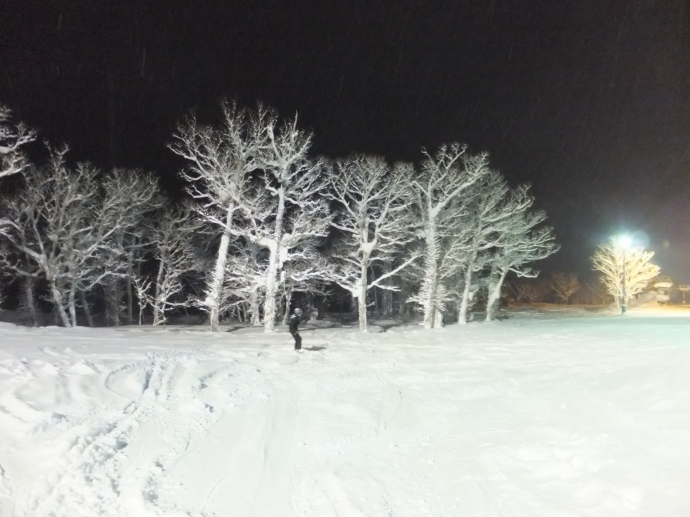 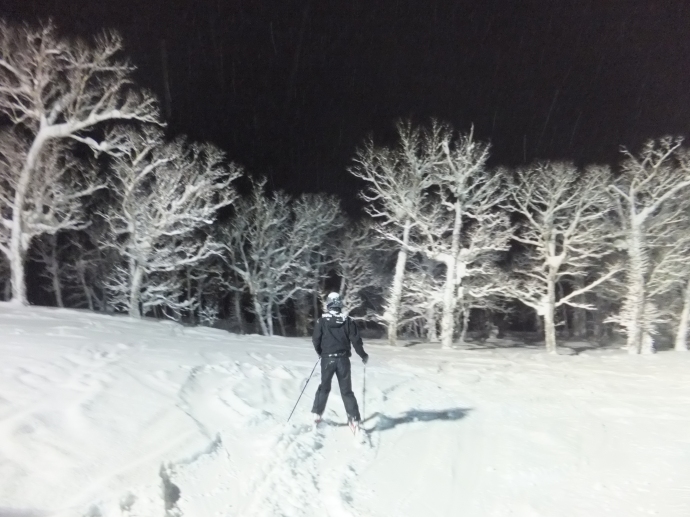 Leaving Niseko the next day was one of the hardest things I’ve ever had to do. I’ve caught the skiing bug badly. Our first trip to Sierra Nevada planted the seed. Niseko made it blossom into a true and burning love! I now think regularly about different places we could ski in around the planet. Mongolia, Serbia and Chile are some of the more random ones I’ve come up with. One thing is for certain though; wherever we go next, it will be almost impossible for it to match up with Niseko.

Annupuri Oasis Lodge is one of the best places I’ve ever stayed in. I’d choose to stay there over any five star hotel. Visit their website at http://www.annupurioasislodge.com/