It was 5:30 am, pitch black and freezing cold. We were on a small country road in Myanmar and the lights had just failed on Janey’s rented E-Bike. This wasn’t the start we were hoping for from our trip to Bagan.

Bagan is Myanmar’s answer to Angkor Wat. Hundreds of temples and pagodas are scattered across a vast plain in the south-west of the Mandalay region. When Tony and Maureen Wheeler travelled around South East Asia in 1975 (the trip that spawned the first Lonely Planet book) they declared Bagan to be their highlight of the entire region. For years though it was neglected due to Myanmar’s self-imposed isolation and a devastating earthquake the year after the Wheeler’s visit. Now though the secret is well and truly out. Hordes of tourists are flocking into Myanmar and Bagan is the top destination on most of their lists.

The most popular thing to do in Bagan is watch the sun rise over the plains, thus illuminating the temples and the hot air balloons that fly over them at dawn. This was how Janey and I found ourselves in our little spot of bother. It was our first full day in Bagan and we’d set the alarm for the ungodly hour of 4:45, to ensure that we’d find a good spot to watch the sunrise. As the temples are spread out over a very large area, you need some transport to get around. Unlike Siem Reap, there are no tuk-tuk drivers waiting around for a fare at 5am. You have to go it alone. Consequently, the most popular type of transport are E-Bikes; noiseless environmentally friendly electric scooters that work on dirt tracks as well as the main roads. Surprisingly for someone who has travelled so much, I’ve never actually ridden a motorbike. There was a misadventure involving a quadbike and a wall in Ecuador, which I’ve always maintained was down to the bike locking up, but may have involved the tiniest bit of driver error but that’s all. Therefore, it was with more than a little trepidation that I got on the bike and tested it out. It was then that I made my first major error of the day. I asked the guy if he had any helmets. The look he gave me was half horrified, half pitying. “What is this halfwit thinking?” he presumably muttered to himself in Burmese. “This is Asia, we don’t do helmets here.” I was crushed. He must have taken me for some sort of Asia freshie, not the gnarled veteran of many Asian campaigns that I like to think I am. 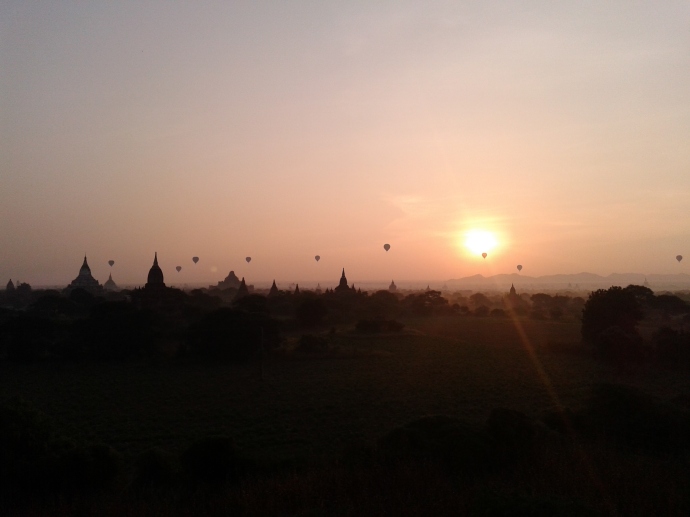 Nervously, we edged the bikes out onto the road, trying not to think of what my mother would say if she could see me riding without a helmet. In the middle of the night. In a country with notoriously bad roads. Everything went reasonably well at first; we got confident enough to push the speed up to a dizzying 30 kph. Then things started to unravel. We couldn’t find the temple we were looking for and then Janey’s bike light failed. As so often happens in situations like this though, a guardian angel appeared. His name was Lin Lin and he was just cruising around on his motorbike at 5am. We explained our predicament to him and instead of guiding us to the place that we had intended to go to, he took us to a much smaller pyramid. We had it all to ourselves and arrived in time to witness a truly mesmerising sunrise. Afterwards, it turned out that Lin Lin wasn’t just an altruist. He did have some paintings to sell. They were of such good quality though and he had been so kind that we bought two of them. They now hang proudly in the living room of our flat. Thanks Lin Lin! 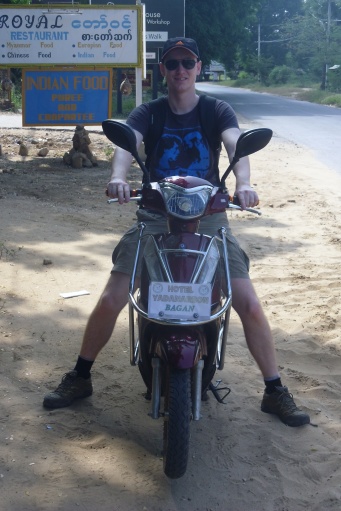 Over the next three days, we took the E-Bikes all over Bagan and saw as many temples as possible. So now, there’s some advice I’d like to impart to anyone who is thinking of visiting Bagan. Firstly, don’t go chasing particular temples. Bagan isn’t very well signposted and if you do this you’ll just end up getting frustrated as you’ll spend a long time trying to find what you’re looking for. You may even end up with the E-Bikes stuck in thick sand as you’ve gone off track to “find a shortcut.” It’s far better just to ride around and stop whenever you see something that you like, which will be frequently. Secondly, it’s asking a lot of yourself to see sunrise and sunset in one day. Try to spread it out so you see one of each on different days. However, if your time is limited and you really have to choose, go for sunrise. The colours are better and the balloons over the temples are wonderfully photogenic. 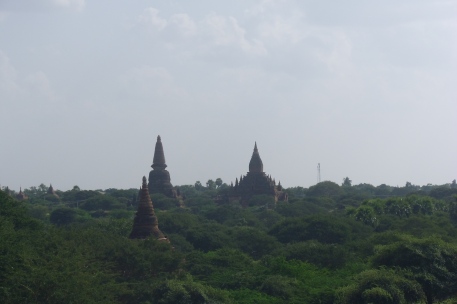 Earlier, I said that Bagan was Myanmar’s answer to Angkor Wat. So, how does it compare to South East Asia’s most visited tourist attraction? Thee honest response is it’s great but it isn’t as good as Angkor. Part of this is due to the fact that it seems less authentic. A lot of the temples were crudely rebuilt after the earthquake, meaning that it doesn’t have the same feeling of antiquity. Furthermore, as more and more tourists flood into Myanmar, the local authorities will need to start signposting things better and providing maps that are actually accurate! However, taken on its own merits, Bagan is a highly photogenic and pretty unique place. It’s certainly worthy of its top billing in Myanmar. I’d highly recommend it.

You have to pay $20 US to enter the Bagan Archaeological Zone. Once you’ve bought this, you’re free to travel around as much or as little as you like.

One thought on “Bagan”