Reasons why orangutans are amazing

For all these reasons, and ginger solidarity, orangutans have always been one of my favourite animals. On our recent trip to Sabah, one of the two states that comprise the Malaysian part of Borneo, I had the opportunity to see these magnificent beasts for the first time.

As it’s getting more and more difficult to see orangutans in the wild, the best bet for primate enthusiasts in Sabah is to visit the Sepilok orangutan rehabilitation centre, one of only three such facilities in the world. Situated just 45 minutes away from Sabah’s second largest city, Sandakan, the sanctuary welcomes thousands of visitors every year. The highlights of the day are the two feeding sessions, held at 10am and 2:30pm. On the morning of our visit, we arrived just in time for the 10am session, as the first orangutans were making their entrance. The orangutans swing along the ropes to the platform where they are fed bananas. The diet is deliberately monotonous, so as to encourage natural foraging behaviour, which is essential if they are ever to return to the wild. The feeding lasts for approximately twenty minutes before the orangutans decide they’ve had their fill and swing back into the forest. Watching it was a fantastic experience. 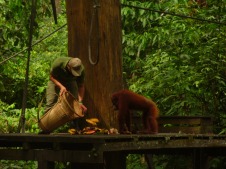 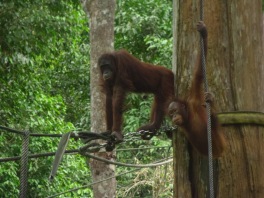 After feeding time there are a couple of options. There is a jungle trail, about 5 kilometres in length, which leads to a waterfall. As there was a high prospect of being leeched we decided to pass and visit the neighbouring Borneo Sun bear conservation centre instead. Sun bears are the world’s smallest bear species. Similarly to orangutans, they are endangered due to habitat destruction and Chinese traditional medicine. At the BSCC you can view the tiny bears from an elevated platform. These beautiful bears were so playful and docile that I was seriously worried that Janey might ask if she could take one home.

After leaving the sun bears we headed to the café for lunch. This was made extremely entertaining when one bold orang-utan, named Sisi attempted a daring, but ultimately unsuccessful, smash and grab raid on the kitchen supplies. Natural foraging behaviour I guess. Finally, it was time for the afternoon feeding session. Although we saw less orangutans this time, it was more amusing as a squad of macaques attempted their own smash and grab raid on the platform. Unfortunately, the afternoon session showed some negative aspects of the sanctuary. Many tourists seem unable to resist acting like complete imbeciles around the animals. When two inquisitive orangutans came down into our midst, they were surrounded by throngs of people flashing away and no doubt causing immense distress for the poor animals. Not cool at all. 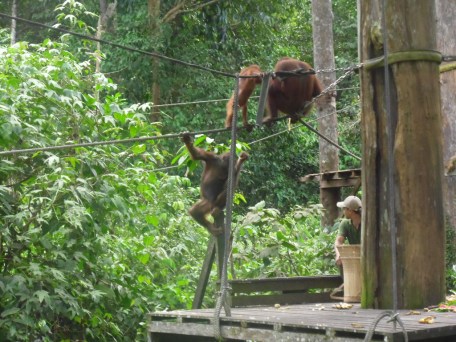 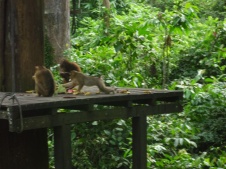 Despite the unfortunate reasons for its formation and the stupid behaviour of some visitors, a trip to Sepilok is a superb experience and one that I’d highly recommend. After all, how many chances do you get to see the great apes in their natural habitat?